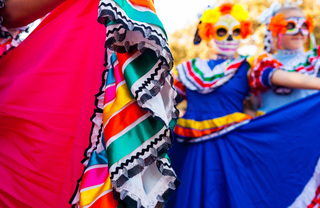 There will be plenty of places to celebrate Cinco de Mayo around the apartments in Denver this year. Few, however, will be as big, bold, and spectacular as the “Celebrate Culture” Festival in Civic Center Park, now entering its 32nd year and going stronger than ever before:

“[This is] a weekend filled with food, fun and culture. Denver's Cinco de Mayo Celebrate Culture Festival puts the spotlight on The Mile High City's vibrant Latino population. With more than 400,000 attendees expected, it's one of Denver's most fun and family-friendly events.”

As with any highly anticipated event, you’ll need the details before you plan your adventure, so today, we’re going to fill you in on everything the Celebrate Culture Festival brings to the table, and what you can do to enjoy the very best of this exciting Civic Center Park extravaganza.

Background on the Culture Festival and Civic Park

Denver’s Cinco de Mayo Festival has been going on annually for the past thirty-two years. Organized by NEWSED Community Development Corporation, a non-profit group founded in 1973, the goal of both the festival and NEWSED as a whole is to “promote and develop economic, community programs and projects that raise the income, educational and political levels of Denver residents.” To that end, the festival puts Cinco de Mayo, a celebration of the struggle for freedom and commemoration of the brave forces who drove the French Army from the town of Puebla in 1862, to the fore for all to observe and enjoy. According to NEWSED President/CEO Andrea Barela, this is the perfect way to give the latino population of Denver their just dues in the event world:

“The event is all about bringing people together and highlighting the beauty and tradition of the Latino culture Denver has such a rich Latino culture that is underrepresented in the event world. We are so proud to bring that to the heart of Denver, and highlight all the incredible Latino artists, musicians, performers, and businesses.”

This celebration will take place on May 4th and May 5th, from 10:00AM to 8:00PM, at Denver’s historic Civic Center Park. The Civic Center neighborhood is one of the political, historic, and artistic epicenters for the city, so it makes sense to hold such a momentous event within its borders. Civic Center Park, with its wide expanses and lovely backdrops, makes for quite the setting:

“Bordered by the State Capitol, the City and County Building, and the Denver Art Museum, Civic Center Park is the centerpiece of Denver's green space. The park blooms with 25,000 square feet of flower beds each summer and serves as a frequent event site.”

What’s more, the park, and, consequently, the festival, are free for you to enjoy. Let’s next take a look at what specific events will be taking place over the course of the two-day event, so that you’ll have an idea of what to expect and can plan accordingly.

Perhaps most central to this Cinco de Mayo spectacular is the lively community parade that accompanies the day on May 4th. It’ll kick off at 11:00AM, on Colfax Avenue at Welton Street, then heading down 17th Street and North Lincoln Street, before finishing up at Lincoln Street and 13th Avenue. The floats, marchers, and live entertainers are sure to be riveting, which leads to another fine feature of the Celebrate Culture on Cinco de Mayo, the stacked performances on the main stage.

On Saturday, May 4th, there will be seven acts gracing the main stage:

On Sunday, May 5th, there will be six more acts to enjoy:

And there will be more great performers at both the Local Talent Stage (at the Great Lawn near Bannock Street) and the Community Stage (at Lincoln Park between Broadway and Lincoln Street), but it’s not all singing and dancing to admire while you’re celebrating Cinco de Mayo this year. Saturday, for instance, will feature the hilarious Chihuahua races. As you might expect, watching these small dogs run about in ridiculous outfits is always good for a laugh, and, in addition to this wholesome spectacle, the Taco Eating Contest will crowning a new champion come Sunday, May 5th. All may enter, but only one can take first place. Will you have the endurance to out-eat the competition and take the prize?

Beyond all that, the entire weekend will be featuring the Lowrider car show. These uniquely customized automobiles attract both those with a passing interest in cars and serious gear heads; the show will features some of the most fantastic lowriders in the Denver area, so if you want to gawk at some fine craftsmanship, you won’t want to miss out on coming to the celebration.

Finally, as with any large, family-friendly festival, there will be plenty of games and activities for kids and adults to take part in, so be sure to check the celebration event guide and the official Cinco de Mayo Denver webpage to learn more about all the happenings that are in store.

Getting to Civic Center Park From the Apartments in Denver

From The Henry, Civic Center Park is just a short drive north from the neighborhood. It’s practically a straight shot, something you’ll learn holds true for many of Denver’s most celebrated landmarks, hotspots, and hangouts. From this pristine city vantage, the whole of the Mile High City is yours to explore at your own pace, with a warm and friendly community to come home to return to once you’ve reached your limit on excitement. This is how the rental life in Denver was meant to be lived; learn more about what The Henry has to offer today, and welcome to the fold!