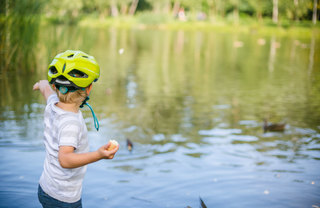 When you call the apartments for rent in Denver home, a whole host of options for summer fun open up to you — the museums, the outdoor markets, the festivals, etc. If you’re the type who craves outdoor adventure, though, few options can compare to the majesty of Sloan Lake and Sloan’s Lake Park, the gigantic Northwest Denver hotspot that’s a haven for recreation and relaxation:

“Sloan’s Lake is the biggest lake in Denver, and at 177 acres, it’s the city’s second largest park. It’s one of the best parks for catching a sunset, with stunning views of the Rocky Mountains and Denver skyline.”

If this sounds like your kind of hangout, we suggest you read on, because today, we’ll be looking into all the details you’ll need to know about Sloan Lake (and the park) before you head out there for some fun in the summer Denver sun.

The Wonders of Sloan Lake

Take a look on the map, and you’ll see that Sloan Lake, located on the western edge of Denver, actually refers to three different facets of the city. First is the Sloan’s Lake neighborhood, the boundaries of which extend from about 29th Avenue to the north, 17th Avenue to the south, Sheridan Boulevard to the west, and Federal Boulevard to the East. As far as Denver neighborhoods go, this is one that’s on the upswing, having undergone some extensive gentrification in recent years.

Incomes, and, subsequently, home prices, are up in the neighborhood, and to top it off, there are more than a few cool restaurants and shops on the outer edges of the area that may be well worth your while to check out. We’ll touch on that in a bit, however, because we’ve also got to break down Sloan Lake itself.

There are no tributary streams that feed to the lake, but it’s a sizable one all the same. At 177-acres it’s the biggest lake/park (well, the largest lake, but the second largest park) in Denver, and that makes it a focal point for all kinds of animal species who love the water. If birdwatching and nature photography are your outdoor activities of choice, you’ll positively love it here, as the lake is home to a wide variety of avian species, including white pelicans, mallard ducks, Canada geese, seagulls, barn swallows, house finches, and common night hawks. Beyond the birds, you’ll find a few water-dwelling rodents (like muskrats), and even a few predators (like fox or coyote), if they think they can sniff out an easy meal.

The history of the lake and its rise to prominence is a history mired in mystery. During the period when Denver was first settled, in the mid 19th Century, Sloan Lake did not yet exist. Though the legends regarding its creation vary in some details, what remains constant is they center around one Thomas F. Sloan, who is said to have accidentally created the lake in the process of working his farmland:

“According to legend, in 1861, Thomas M. Sloan tapped into a water aquifer while digging a well to irrigate his farmland in what is now considered West Denver. Overnight, the lake spread to a whopping 200 acres and soon attracted onlookers to confirm rumors of a new body of water, graced with monikers such as Sloan’s Leak, Sloan Lake, and Sloan’s Lake, a name that would continue to be debated over a century later.”

Is the legend true? We may never know the real answer, but it’s certainly possible this creation tale has some kernels of truth to it, and regardless, the fact remains that Sloan Lake is still a highly-recognizable Denver landmark, perhaps even more so now thanks to all the hustle and bustle in the surrounding neighborhood.

Finally, there’s the park that surrounds Sloan Lake — Sloan’s Lake Park. This area is jam-packed with things to do if you love the outdoors, including:

All of these activities are ready and waiting for you to partake in, and there’s even more to do if you’re an avid biker or hiker. Those aforementioned trails 2.8-miles, encircling the lake. All Trails has the breakdown if you want to do a bit of trail research before you drag your bike out there, so be sure to read up on it and plan accordingly if you intend on completing the entire Sloan Lake Loop.

You’ll also be pleased to note that fishing is permitted everywhere in Sloan Lake, with the exception of the channel between the island and shore. Bring your fishing rods, a couple of close friends, and a few tasty beverages, and you’ll be all set for an exciting day with just fishing alone. In the end, though, you’ve got your pick on what you want to do, be that having a picnic, indulging in a long hike, or something else entirely.

And before we forget, while Sloan Lake and the Park have been the focus of this area for many years, recent developments have seen what’s further out in the neighborhood take center stage, to the point where 5280 felt the need to create a quick neighborhood guide to hip Denverites to some of their options in the area. When you’re done enjoying the park, wander out into the streets of Sloan’s Lake, and see what this booming neighborhood has to offer when it comes to dining, shopping, and anything else that might catch your fancy.

For enjoying the best of Denver’s offerings, few communities rival The Henry. Located between the beautiful Platt and Washington Park areas, these apartments seem to have proximity to everything — from shops and markets to stellar dining and entertainment options. What’s more, when you’re here, you get to enjoy those superb and spacious residences, with all the creature comforts and fine amenities a city apartment should include. This is how Denver was meant to be experienced. Get in touch to find out more, then prepare to make one of the city’s most desirable spots your very own.